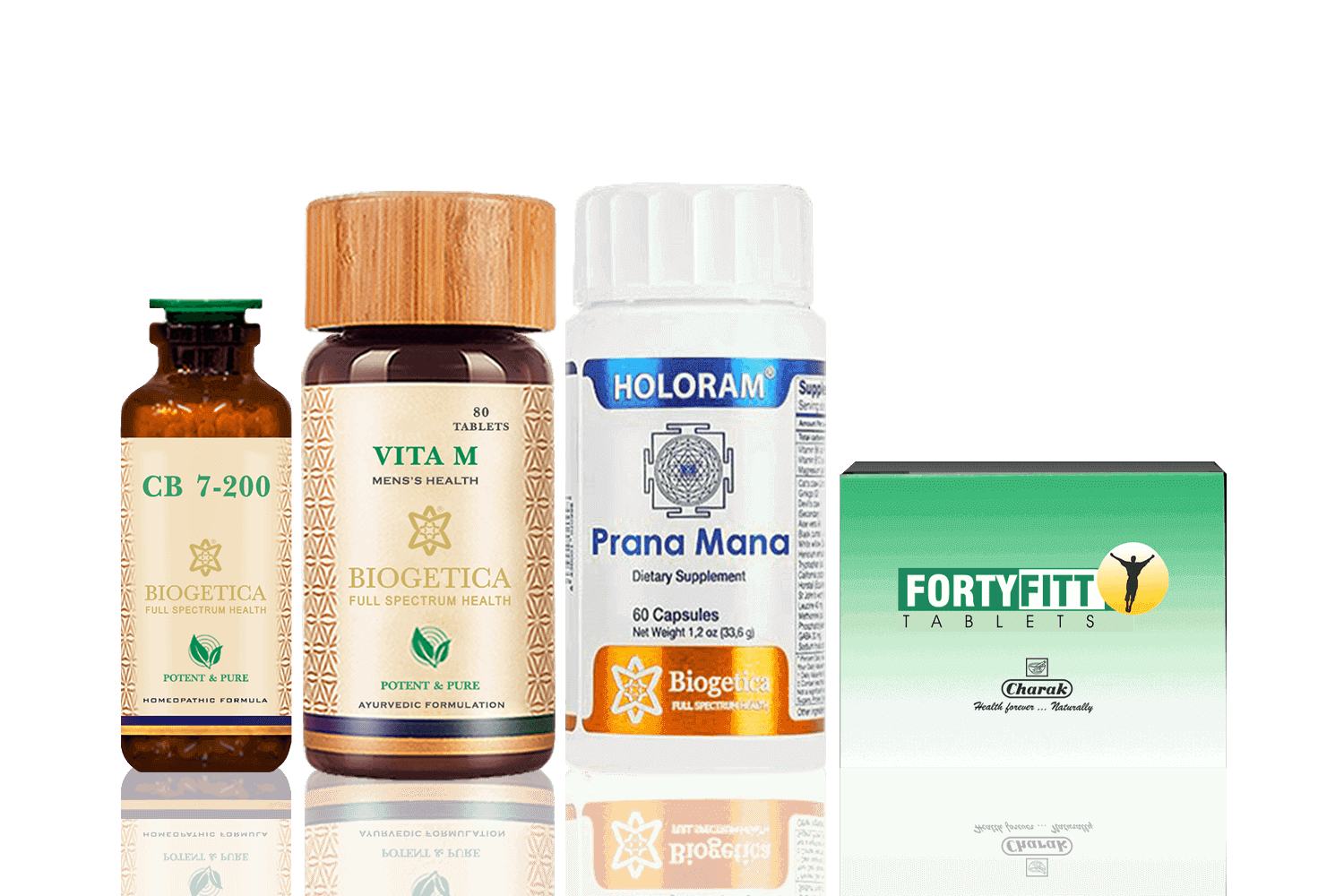 The Biogetica Freedom kit with Fortyfitt Rejuvenative Formula is a basic combination of Ayurvedic herbs, Nutraceuticals and Homeopathic products traditionally believed to rejuvenate and improve the health of the cells of the body.Read More

This kit consists of the following 3 natural therapies:

A combination of Vibrational Homeopathic therapies, MIX 7 CB 7 200 is traditionally believed to support the body after a chronic illness.

Fortyfitt Tablets are a comprehensive Ayurvedic formula traditionally believed to reduce sensitivity to stress, boost energy levels and create a sense of well-being. It is believed to assist the smooth functioning of muscles, bones and marrow.

PranaMana stimulates the production and distribution of healthy, biological energy. It is aimed at preventing and correcting energy imbalances that affect the quantity, quality and/or distribution of energy in the body. Disturbances in the Energy spectrum is the first layer of resistance to any type of therapy and are directly correlated to a dysfunction in the production of energy at the mitochondrial level.

VITA M is an Ayurvedic formulation made from potent herbs that are traditionally recommended for improving overall health, potency and wellbeing in men. **

These herbs have been used in the Indian systems of medicine for centuries to promote and stimulate men’s health.**

BELLIS PERENNIS – traditionally believed to act on muscular fibers of blood vessels; venous congestion; abdominal muscles. It is believed to work, especially on the muscles and blood vessels of the uterus.

CALC FLUOR – traditionally believed to put elasticity back into muscles and tissues wherever there is a relaxed condition in the system.

FUCUS – potential general tonic; it is a seaweed that contains iodine; traditionally believed to work on muscles, blood and blood vessels.

PranaMana is a bio-regulator that is traditionally believed to fight asthenia, and weakness induced by physical or psychological stress, often associated with chronic fatigue syndrome. It is believed to prevent the accumulation of ammonium and promote their elimination, by activation of the Uric acid cycle. It provides the micronutrients necessary for the Krebbs cycle, thus facilitating the production of cellular energy. It is also involved in the transfer of energy from mitochondria to the cytoplasm. The result is an overall increase in energy reserves, essential for a healthy lifestyle.

The mechanism of action of PranaMana is traditionally believed to allow a synergistic action to induce the increase and regulation of energy through:

The synergistic activation produced by PranaMana is the result of a combination of carefully selected amino acids, enzymes and minerals critical for the production of energy in the cells and in complex organic systems such as the small intestine, the liver, striated muscle and the brain.

Dosage: Take 1 or 2 capsules a day in the morning, before breakfast or as advised by your physician.

Each capsule contains extracts of:

See what our existing Customers have to say about us

“I would like to testify that Biogetica natural health products are truly effective. As a medical practitioner, I have treated many patients with Biogetica products with tremendous success. People with weak extremities, protruded abdomen, sleeplessness, vertigo, severe palpitation of heart, scanty and frequent urination as well as other ailments have been saved with Biogetica kits. I love your combinations, especially the following kits:Hepatitis Prostate hypertrophy High blood pressure Syphilis Psoriasis.May God richly bless the brains behind this wonderful company. I wish you good luck and success.”

“WOW WOW WOW! How can a product work this good and not be prescribed by dermatologists everywhere? Why isn't it on the news or in stores? My best friend asked me if I had cosmetic surgery on my face because she said I looked 10 years younger. Just from one month using your Skinelle Acne line and my cystic pimples are nearly all gone. The few that have appeared don't linger for the usual weeks on end but disappear with in a couple of days. And to my surprise, my skin is glowing! I wish everyone who is suffering from one ailment or another could stumble upon your web site as I have. I wish I could scream it from a mountain top! I will be writing to Oprah about your company. I hope she talks about it on her show as it will mean it is being screamed from a mountain top. Thank you so much!”

“Thank you Biogetica for your help. I have used your products for hpv, candida and eczema with very good results. After 4 months of using your hpv kit, I just got my pap and hpv results yesterday and I'm all clear! No hpv and a normal pap! Thank you! I have been using your eczema kit for a month and am already seeing results, the eczema on my upper arms is gone and the patches on my neck are fading. I have also been on your candida remedy for a month and am seeing very good progress. I look forward to continuing these remedies and getting better and better. Your doctors are always so kind and helpful when I have questions. Biogetica remedies work and it is a very caring, compassionate company. Thank you!”

“You guys have cured me of TWO "incurable" diseases. This is why I spend hundreds of dollars curing my friends of them as well. No amount of money can pay for the smiles on peoples faces. Stay in the fight guys. You are winning :)”

“Thank you for your speedy response! Yesterday, my mother informed me that the vertigo "medicine" is working marvelously. She has been using it for five months now and has had veritably no symptomatic recurrences at all. Understandably, she calls your products "miraculous". Keep up the good work!”

“My wife has had warts on her hands for about 6 years now. She started using the freedom kit, and within 4 days could see visible shrinking of the warts. It has been a month now, and her warts just vanished as if it was never there. We only wish we had known about this remedy earlier.”

“I found your website while looking for solutions to support the liver. What I found is much more than Liver Support, what a website! It's fantastic, the information is invaluable. I saw the Resource tab and have been doing the guided meditation for several nights now, so relaxing, but especially, the guided meditation that houses the full community or universe of beings. After reading all of the material, especially with regard to homeopathy, I am impressed. This is a fully functional website with information to support each and every one of your clients. Most websites are interested primarily in selling, Biogetica is providing lifelong tools. My compliments to Biogetica.”

“I do not find the correct words to express the grateful feelings my heart feels. You really are my friends. I feel fine, the trigeminal pain is gone and I am so grateful for your wonderful medications.”

“My mother has had Idio Pathic Pulmoary Fibrosis for 7 years and now has Emphysema to boot. I thank you so VERY much for your herbs which have been wonderful in their affects. Acupuncture, on top of that has helped dramatically after the Drs said there was nothing more that could be done!!!! God Bless!!!”

“I finished my bottle of HPRZ and I just had my PAP test 2 weeks ago and the results are back...It came out great and all the precancerous cells are gone too! It was my fourth test and the Doctor felt sure that it wasn't going to be better and I would need surgery. I can't thank you enough and I will recommend you in the future to anyone who has a similar problem.”

0
0
Your Cart
Your cart is empty
Apply Coupon
Please Use Coupon code "bloom" for 18% off today!